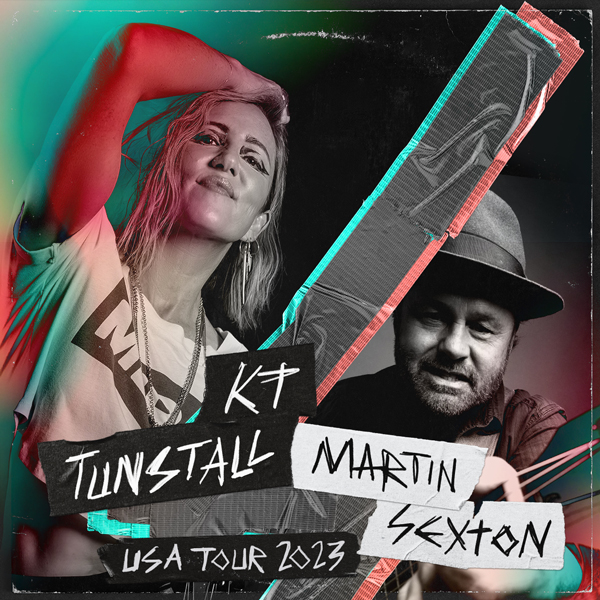 Martin Sexton returns with what Rolling Stone calls his “soul-marinated voice,” acoustic guitar, and a suitcase full of heartfelt songs.

The 2023 Tour takes Martin across North America in support of his latest ep 2020 Vision (produced by 3-time Grammy nominee John Alagia (Lukas Nelson, John Mayer, Dave Matthews) as well as reinventing his own classics for these critically-acclaimed solo performances.

Still fiercely independent and headlining venues from The Fillmore to Carnegie Hall, he has influenced a generation of contemporary artists. His songs have appeared in television series such as Scrubs, Parenthood, Masters of Sex, Sprung, and in numerous films, though it’s his incendiary live show, honest lyrics, and vocal prowess that keep fans coming back for a new experience every time.

KT Tunstall:
Since scoring a worldwide smash with her debut album Eye To The Telescope in 2004, which went on to sell over 5 million copies, KT Tunstall has remained at the forefront of UK Singer-Songwriter talent. KT followed up that early success with albums Drastic Fantastic, Tiger Suit and Invisible Empire//Crescent Moon in 2007, 2010 and 2013, respectively, keeping the platinum sales rolling and cementing the Scottish singer-songwriter’s reputation as a major recording talent, as well as a mesmerizing live artist.

After a period of healing, soul-searching, and a change of scenery, 2016 hailed the arrival of the first of a trilogy of albums, the critically acclaimed UK top 10 album KIN. The trilogy evokes, separately and in sequence, spirit, body and mind. With KIN being her phoenix- from-the-ashes ‘spirit’ album, 2018 marked the second offering of that trilogy, the ‘body’ album WAX. The first single from this release, “The River,” was named one of Rolling Stone’s ‘Songs You Need To Know’.

Tunstall has toured the world many times over. She outsold every other female artist in the UK in 2005, won the 2006 Brit Award for Best British Female Solo Artist, won the Ivor Novello Best Song award for her huge, self-penned hit “Suddenly I See'” and a Q award for Track of the Year. She also landed a Grammy nomination for Best Female Pop Vocal Performance with “Black Horse and the Cherry Tree,” and lent her tunes to a host of movies and TV shows (“Suddenly I See” being used in the iconic opening scene of modern classic Meryl Streep film The Devil Wears Prada).

In late 2021, KT headed back out on the road. She supported Rick Astley on his huge UK Arena tour, performed on-board the Melissa Etheridge Cruise and played a run of sold-out solo dates in the U.S. Ending the year in style, KT was appointed the huge honor of headlining the legendary New Year’s Eve celebrations in Times Square, New York, which saw KT perform her hits – as well as a cover of John Lennon’s “Imagine” moments before the famous ball drop – to a live crowd of 15,000, with a further 1 Billion viewers watching worldwide!